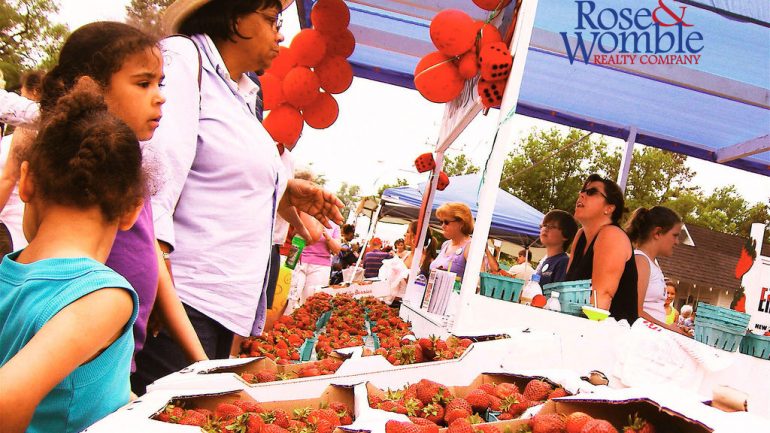 Pungo Love: Getting to Know this Strawberry-Scented Corner of Virginia Beach

Many people don’t know much about Pungo, beyond that the Pungo Strawberry Festival, held each year on Memorial Day weekend, is one of our area’s best local celebrations.

So, let’s take a closer look at Hampton Road’s rural jewel. Named after a local Native American tribe, the Machipungo, and its chief, Machiopungo, the Pungo section of Virginia Beach has evolved from a sleepy farming community south of the green line to a slightly more wakeful, but still wild, region. I am glad that Pungo still has one stop light at the corner of Princess Anne Road and Indian River Road, and that most of the publicized destinations are still near that intersection.

The intersection creates “downtown Pungo” and is where most of the festivities for the Strawberry Festival occur. Held every year since 1983, the festival celebrates the rich agricultural heritage of Virginia Beach, focusing on the strawberry. People throughout Hampton Roads and beyond descend on Pungo to enjoy everything from live music to pie eating contests and arts and crafts displays to pony and carnival rides and a parade. But Pungo offers so much more beyond it’s famed holiday festival. In the immediate area of the intersection are a few great local restaurants including The Bee & The Biscuit (1785 Princess Anne Rd., 757-689-6243) serving breakfast and lunch made with produce from the local farms in a restored 1919 cottage. But Pungo is deeper than one stoplight. It’s best to bring a paper map, because so much of what there is to discover comes from the joy of wandering roads that end at inlets and marshes, and understanding the vastness of the country you’re exploring. Travelling east on Indian River and south on Princess Anne, you encounter dozens of farms and their farm stands. The best way to eat local is to buy local, right from the doorsteps of the farms that harvest and create the food. Many, such as New Earth Farm (1885 Indian River Rd., 757-301-7995) offer classes and Community Supported Agriculture produce subscriptions. And opportunities to pick your own produce abound—everything from strawberries and corn to cutting your own Christmas tree in the winter.

If you follow Indian River Road to Muddy Creek Road and travel east a bit, you’ll find Blue Pete’s (1400 North Muddy Creek Rd., 757-426-2278), one of Virginia Beach’s oldest restaurants. What was a major destination for fine dining in the 1970s has renewed itself as a favorite hangout and casual dining spot for Pungo natives, set deep in the countryside and overlooking the water. I think their food is great, and when I was a kid, back when it was a more formal place, my parent’s French friends used to take us there for special dinners. Once when I was five, I mistook the fancy balls of butter on the table for ice cream, and was very surprised after stuffing a whole butter-ball into my mouth.

Now let’s travel south on Princess Anne Rd. Get your map. One of the coolest places in Hampton Roads is soon on the right: the Military Aviation Museum (1341 Princess Anne Rd., 757-721-7767). It houses one the largest private collections of restored World War I & II aircraft in the world. Explore the hangars and check out one of their frequent air shows held at their small airport. You can even book a private ride in one of their bi-planes.

Further south, now well into Creeds, you can head to Blackwater across the Pungo Ferry Bridge, or just take the turn on Old Pungo Ferry Road just before the bridge turnoff and enjoy a small park overlooking the beautiful span over the North Landing River.

But just beyond the bridge, where Princess Anne curves sharply to the left at the corner of Buzzard Neck Road, is a small farmer bar called Monk’s Place (649 Princess Anne Rd., 757-426-6922). Stop here. Eat a cheeseburger. Ask for it how it comes. You’ll thank me.

Bob Prince opened this place a long time ago, and his family still runs it. Not much has changed since the 1980s when I went as a teenager. It was then, and still is now, the home of the best cheeseburger in Virginia. Back when Bob was alive, he’d yell at you if you asked for ketchup, because he grew the tomatoes in the back yard, and if you came on a Sunday when the Redskins were on, you’d have to wait until half-time for him to make your order. He installed a sign in front that said “limo parking only,” but the farmers parked there anyway. The sign is long gone, and the Redskins memorabilia has been replaced by Nascar, but the burgers are the same. Just in case you didn’t get it by now, if you only do one thing in Pungo, eat at Monk’s.

After your cheeseburger, continue south and take a left on Morris Neck Road. When you get to the old tennis courts on the right at Campbell’s Landing Road, make a right and follow the road around the curve to the right until the now-dirt road ends. When I just got my license in the ‘80s, I would take my nieces to Pungo and we’d explore. When we stumbled upon this spot, we called it “The Looking Place.” Park here among the marsh grasses to get one of the best views of Back Bay you’ll find anywhere. One time, as we were approaching The Looking Place one afternoon, there was a dog wandering the road as we headed to the small beachhead. Being a protective uncle, I ordered my young nieces to “lock the doors.” They burst out in laughter at my fear of “the door-opening dog.” That’s another story, though. Perhaps I should write it in a children’s book class at The Muse Writers Center. There is still one place everyone should check out in Pungo, so head back to Princess Anne and head south, turning right on Munden Point Road. Just down a bit is Munden Point Park, a gorgeous 100-acre city park set on the North Landing River and Intercoastal Waterway. Have a picnic on the lawn or in one of the shelters, play disc golf or softball, or play in the playground. You’ll find neighbors launching their boats and an amphitheater with various goings-on. I like to just sit there, watch the water, and soak in the peace and quiet.

North Carolina is just a mile away, and as a bonus, if you keep on Princess Anne Road into NC, after about a mile you’ll come to a breathtaking vantage point of Back Bay. The expanse of the bay will be to your north, and a marshy wetland to your south. Just don’t make the mistake I made one summer at sunset. We got out of the car and walked to the little bridge to take in the sun’s last rays reflecting off the water. When we got back to the car, we realized we had left the windows open, and as we headed back into Pungo and then the urban wilds of Hampton Roads, we welcomed hundreds of mosquitos on our journey home.