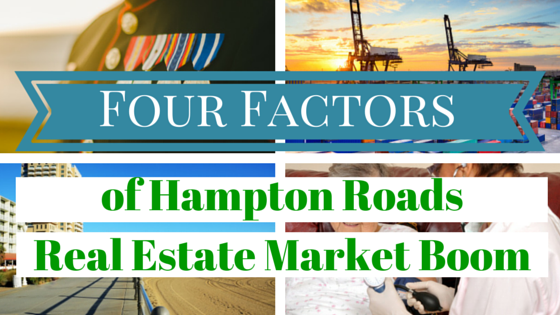 Most of us have heard the expression, “When all the stars align.” According to the Urban Dictionary, that expression means, “when an unexpected and nearly impossible event takes place, usually due to pure luck or the divine intervention of God.”  This seems to me to be exactly what may have happened in Hampton Roads in the past nine months; the stars all started to align and with it the housing market heated up.

Let’s take a look at those stars.

Locally, military and defense spending got a push this year due to ongoing global security risks.  The Department of Defense has all but abandoned the idea of sequestration, which strangled the real estate market in 2014. Here are just a few of the new projects that are bringing in thousands of jobs to the region:

Who has not seen the activity at Portsmouth Port Authority? This economic engine pushed 288,000 containers through the port, in May. That is an all-time high.  If this activity continues at an astounding pace and with the expansion of the Panama Canal, we stand to see a long term improvement in this arena.

Tourism is and will be booming throughout Coastal Virginia, from Williamsburg to the Beach.  Norfolk has already seen increases in hotel stays, and additionally announced earlier this year the return of Carnival Cruises in 2016. According to the Virginia Beach Economic Development Authority, 43% of all tourism spending is spent in Virginia Beach which creates over 12,000 jobs. Tourism is a continual economic engine for Hampton Roads.

Finally, it is apparent the medical services industry is shining throughout the entire area.  It seems impossible to find a major medical facility that is not undergoing some form of expansion at this time. Baby boomers are getting older and they are sticking around and need services. Over 75 million American make up the baby boomer generation, and they are retiring at the rate of 3 million a year for the next 20 years. This will require significant spending in the medical sector and retirement housing.

When you put all these stars together, the results have been incredibly encouraging and very evident in the residential housing market. Consider the following:

The stars have aligned on our four major economic drivers which  has played out in our residential housing market in a most positive way. Thank our lucky stars!